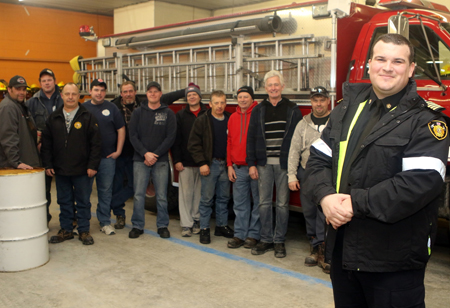 A new Chief in charge is at the helm of the Alnwick/Haldimand Township Fire Department.
Fire Chief Kyle Wood’s his first day on the job was February 20 and since then he’s been very busy attending calls and getting up to speed wit the township.
Fire Chief Al Mann has retired and the Township picked Wood from a list of applicants.
The first day on the job Wood was at a meeting with area Fire Chief’s and Chief Administrative Officers from around Northumberland County.
Former Chief Mann helped show Wood the stations and bring him up to speed on each of the three halls, equipment and firefighters.
Wood spoke to Today’s Northumberland about his new position.
“This is a dream come true for me.”
“I cannot explain how much this is a dream to run a volunteer fire department, come back full force and help these folks succeed.”
“Hopefully a couple of my firefighters here can go on to be Chief’s as well. I’d be nothing but proud.”
Wood started his career in the City of Hamilton as a volunteer firefighter and moved his way up into fire prevention.
Later he received a position with a large corporation in Canada taking on the role of fire prevention and investigations.
“So I got to see both sides as a consumer or customer and I got to see a municipal side.”
Wood is coming from a similar size service in Iroquois Falls where there are approximately 5,600 residents with three fire stations and same amount of volunteers.
Wood was Fire Prevention Officer/Chief Fire Official and only full-time member of the department.
Coming from a long line of firefighters in his family, he never really wanted to leave being an active member of a fire service which is what drew him back to firefighting.
“My grandfather was a volunteer, my uncle was a volunteer and now he’s a District Chief in the City of Hamilton so it runs in our blood.”
“My big thing was being able to come back to a municipality. I always wanted to be a “hands on” Chief.”
“I love being a leader, and not being a dictator.”
“I love to be somebody who people can look up to and ask questions and I want to be out there with my guys and gals for calls.”
“If they need me I’m there to support them either to get coffee or to make tough decisions.”
Having been apart of a corporation, municipal fire department and a lot of fire prevention, “it was an excellent opportunity that was given to me and I couldn’t pass it up.”
Since becoming Chief, Wood said there are a few initiatives he will be working on in the coming weeks and months.
“We have Highway 401 and I’m a huge health and safety person for my guys and gals because I want to keep them safe.”
“We’re going to hopefully get our trucks that will be out on the highway outfitted with blue lights on the back so when our crews go out on Highway 401 they are going to be safe.”
Firefighters will be trained in using Naloxone which can save a person’s life if they have had an overdose. With emergency service workers possibly coming into contact people who have ingested illegal drugs it’s a priority to keep the firefighters safe. Even a small amount of an illegal drug could kill a person if they come into contact with it. Naloxone is used widely across North America and has saved countless lives.
“It’s about training our firefighters and making sure they are safe.”
Wood said his third initiative is to help and support the firefighters and make sure they know if they want training they will have it and the proper path that goes along with it.
Starting as a volunteer firefighter, there is sometimes a misconception about the different between a volunteer and full-time firefighter.
“A volunteer and a career firefighter are not defined in how much you get paid.”
“Neither is professionalism. It’s your heart and we all do this because your heart is in the right place.”
“I always tell people, I risk my life and so do these guys and gals for people they don’t even know, imagine what they would do for their loved ones.”
Wood has moved to the area with his wife and looks forward to getting to know the community and people better.
Being the Chief Fire of Alnwick/Haldimand Township, Wood says, “it’s a win win for everybody because I have lots of family down here and in the Toronto area.”