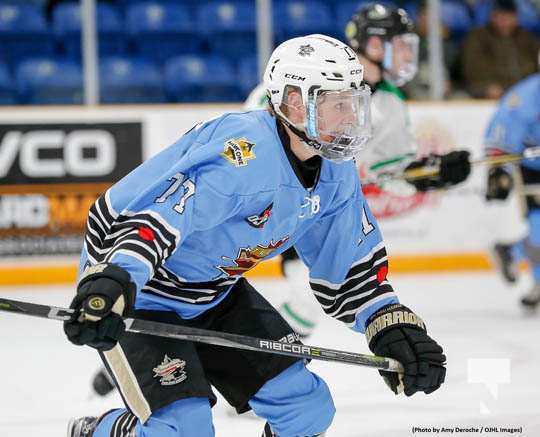 A former Trenton Golden Hawk was selected this weekend during the NHL draft.  Ethan Cardwell of Courtice, ON was taken by the San Jose Sharks on Saturday in the 4th round, 121st overall.  The Sharks were able to get the selection, due to their role in the Nick Foligno trade to Toronto.   They sent Stefan Noesen to Toronto for the pick, while taking half of Foligno’s salary.

In a Twitter post Saturday Cardwell said, “What a day… A dream come true!  So happy to join the Sharks organization.”

Cardwell will turn 19 on August 30th (2021) and was eligible last season for the draft, however was skipped over.  Cardwell made the decision to play this past season in Sweden, with the OHL not playing due to the pandemic.  He told the Sharks media, “With Barrie (OHL) not playing, I figured I needed to make the most of the opportunity and so I decided to play in Sweden (Surahammars).  The community welcomed me in and I think that is why I did so well there.  I am not the biggest guy; I use my speed to my advantage.  I would compare myself to Travis Konechny (Philadelphia Flyers).”

The 2018 2nd round OHL Priority Selection of the Saginaw Spirit says, “The coaching staff in Saginaw thought I needed some work and a deal was struck for me to go to Trenton. My focus was to develop and play against bigger players. I knew the area, having played many times against the Quinte Red Devils and playing games with Wellington. Going to the “Dunc” seemed like the right move.”

“Everything about the Trenton Golden Hawks was top notch, from the ownership and billets, to the volunteers, the arena, the town, and most of all the fans.  You do not get the support in the big city like Trenton gets,” Cardwell says.

He had 17 points in 27 games wearing the white, black, and gold, before finishing the 2018-19 season with the Pickering Panthers, then the Spirit in the OHL.  In the 2019-20 season, Cardwell excelled at the OHL level, getting 47 points in 63 games. He split his time between the high-flying Spirit, and the Barrie Colts, where he was traded in the middle of the year. The deal included a 16-year-old teammate and a number of picks, for former first overall pick Ryan Suzuki (1st Round NHL pick of Carolina).

Trenton Director of Operations John McDonald says, “We are thrilled to hear the news about Ethan’s selection.  When we watched him play, we knew the potential this young man had.  He worked hard, was eager to learn and quickly adapted.  On behalf of the entire Trenton Golden Hawks organization, we congratulate Ethan and his family.”