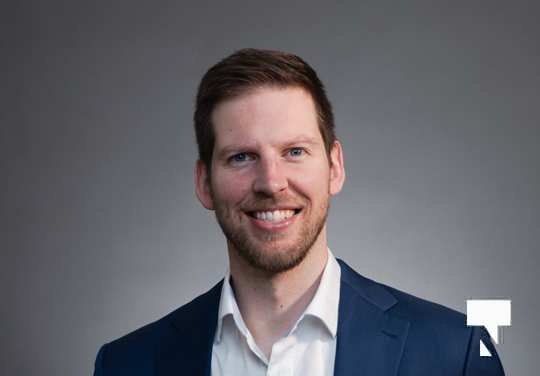 Whether you’re following your dream or just trying to get through the COVID-19 pandemic, life’s challenges can loom large – as Olympian Jeremiah Brown learned on his road to a silver medal in the Men’s Eight Crew rowing event at the 2012 Olympics.

Appearing on behalf of Northumberland United Way, through the sponsorship of Acme Electric, Brown shared his lessons in a presentation Thursday night.

He has also told his story in book form, with The 4 Year Olympian: From First Stroke to Olympic Medallist.

Brown, who grew up in Port Hope and spent his high school years in Cobourg, had only modest athletic achievements to boast of – childhood hockey and football, mainly.

As an 18-year-old university student, he had a lesson in facing and adapting to unexpected changes when his girlfriend Amy West announced he was going to be a father.

“Sometimes the biggest gifts in life show up as challenges we don’t feel ready for,” he said.

“We had to figure out how to be the parents we wanted to be 10 years into the future, but today.”

After their son Ethan was born at Northumberland Hills Hospital, both of them finished university.

“At that point in my life and even now at the age of 35, I think some part of life need to remain a mystery – a journey of discovery,” he said.

They were visiting his parents in Cobourg in 2008, when he turned on the TV in time to see Canada in the lead at the men’s rowing finals at the Beijing Olympics, the eight rowers performing like a well-oiled machine. He watched them get the gold medal, marvelling at whatever epic life’s journey had brought them there.

He noticed their ropy awkward arms and legs, and realized that was his own look. He began to get an idea.

“I decided to take my moon shot and join this team,” he declared.

Brown Googled the location of the Canadian Olympic Rowing Team, found it was Victoria, BC, and began persuading Amy that they needed to move to the entire opposite coast from Cobourg – just for a few years, he said. She finally agreed, and the little family headed west to resettle.

There is plenty of credit to share in a success story like this, and two memorable coaches were part of it – Doug White and Mike Spracklen.

“I learned that if you are going to do something that is going to stretch you to the edge of your potential, you have to find a way to build outside accountability into your path. We all need a coach in our corner,” he said.

White, who had coached athletes at the highest level in the world, just happened to live in Victoria. Setting up a meeting at a cafe, Brown found White looking intensely into his eyes as if he were searching his soul as he asked the obvious questions – why did you come all this way? What do you want from this sport?

White arranged a one-man boat for Brown to begin in. Just as he got into his first unisuit and climbed into the tippy craft, White pushed him clear and he took the first of countless spills he would be taking on this lake.

Showing a point-of-view film of rowing, he pointed out that you travel forward but sit facing backwards – “a wonderful metaphor for life,” he pointed out.

“You are propelling yourself into the future unable to see the obstacles that await. Rowing is life.”

His next lesson was expectations vs. reality. With his eyes on the prize, he found the road to success was not a straight shot. As he fell short of where he thought he should be, it seemed as if he would always fall short. At this point in one’s journey, the logical response is to drop out – or, as he put it, your first exit point.

“That’s the value of a coach. They are there to take you further and faster than you can go on your own. You may have friends, but it’s a coach you need to get you to your goal,” he said – “lending you perspective and keeping you in the game that much longer.
“Sometimes it was only Doug’s belief in me on those early mornings that allowed me to go through those feelings of shame, the feeling of ‘how dare I pursue such an audacious goal – what right do I have, with my responsibilities.’”

Recalling White’s unflagging encouragement, he said, “I found early on I have got to have an anchor that is stronger than your own blind ambition.”

Ethan was an inspiration too. If he did not meet his goals, he could at least tell his son he gave it everything he had.

At the same time, White became a father figure to him, taking him from the very beginning to an invitation to join the national rowing team on a full-time basis.

That’s when Spracklen came into the picture, head coach of the men’s Olympics team and responsible for 13 medals. But his methods were not as supportive as White’s. He was more inclined to egging his athletes on than cheering them on.

“It took me two weeks to realize I hated this man,” Brown declared – a burden he carried as a tight knot in his sternum as he powered through training.

Joining a team that had been together for some time, he found he was among long-term athletes who had experienced success in their endeavours throughout their lives, finding that success at school led to success at university, which led to success in professional athletics.

“The only advantage I had was my ignorance. I had nothing to compare my experience with,” he said.

“I could see some of these athletes start to quit – get that job, get that graduate degree. There comes a place in your life when you say, ‘this is it, this is where I am willing to go a little further than I have been willing to go in the past.’”

He shifted at this point into something he called the finisher mindset that helps one get beyond that point where progress stalls and a plateau looms.

“We are still improving, but the rate at which we are improving is beginning to slow down,” he said.

“Even as you get closer to the goal, you feel like you have never been so far away. The last 2% of the way feels like it takes 80% of the effort. The angels of tedium, toil and boredom are whispering in your ear that it’s not worth it.

“Take heart. You are on a journey of discovery. Every day is as much about discovery more than what makes you better than any of us.”

His first big race was the World Cup in Italy, where he was struck by the struggles of the last stretch of the course, a time when the athletes are exhausted and depleted and focused on outlasting the other teams. His performance grew choppy, his timing was off, he was making it harder for his teammates. He remembers it as a traumatic experience.

“If you give everything up to try to reach your goal, sometimes you are going to go into failure and you have to find a way to pick yourself up off the floor,” Brown said.

His reaction was a mindset he called optimistic resignation, “the most powerful mindset, tool or hack I know to unlock yourself from physical or mental suffering.

“I learned this from Doug White. He said, ‘I understand you can’t see the way forward right now, but that doesn’t mean it’s not possible. It doesn’t mean there’s not a way.’

“Do you make the time line more important than the goal itself? Your commitment to that next 18 month lets you start to allow for possibilities. It was a subtle mindset shift that unlocked everything.

“If we have that time commitment, we can approach the small defeats along the way.”

Spracklen always conducted a meeting after a big defeat like the World Cup to get feedback from team members. Brown prepared his answer and waited his turn, but Spracklen didn’t ask him a question – just unloaded the criticism.

Team members dispersed after the meeting, and Brown went to his room. A knock at the door surprised him, and he opened his door to a couple of teammates who said they could see past the ragged performance he’d turned in – and they liked what they saw.

“They said, ‘you are going to be part of the equation that’s going to get us on the podium in London. Don’t give up. Keep going.’”

“To hear I had not lost the trust of my teammates but earned it by throwing myself so hard into this,” he said – “I wanted to be one-eighth of that team that was gong to be fighting for a medal at the Olympics that year. For me, it meant everything in that moment.

The year leading up to the Olympics saw Brown working the hardest he had ever worked, but being part of the team was a powerful motivator – as was his teammates’ faith in his performing at a high level.

“It was not about convincing them any more. It was about not letting them down.”

This can-do attitude took a beating when they arrived at the Olympics and had a disastrous initial heat where they came in last by a full 13 seconds. When Spracklen held his customary team meeting that night, they could hear his voice starting to crack under the pressure, and Brown could see there were two choices.

One would be to say, “We’re only human. Anyone would crack under all this pressure.”

The other would be to say, “We belong here. We have trained as hard or harder than anyone else in the world.”

Their challenge the next day, as Brown put it, was “going as hard as you can but not harder than you can – to stay present and do your best but not exhaust your reserves.”

They were rewarded by coming in second to the Brits and winning a place in the final race.

A day of rest remained before the big day. It might seem logical that the athletes take that rest in order to be at their best. Spracklen’s move was to flog his team up and down the lake so they would feel comfortable with their performance and ready to win.

They began the next day with breakfast and a workout on stationary bikes and rowing machines, followed by a massage – then down to the race. He couldn’t help thinking, “Somewhere in the world, some jerk is lying on the couch watching us on TV, thinking it looks easy.”

Nevertheless, they worked their way to a silver medal. Brown recalled the exhaustion, the relief and the exhilaration of sharing the moment with his eight teammates in a bond that would last a lifetime.

Accepting the congratulations of his family afterwards, he also had to acknowledge their support – especially how Amy had put her own life on hold to let him commit to his own dream.

Brown is pursuing a new dream now, being a keynote speaker. He performs at 20 to 30 events a year.

Looking further into the future, he is considering establishing a company that builds electric bikes.

And looking not quite so far ahead, two of his former teammates will still be competing at the Tokyo Olympics.