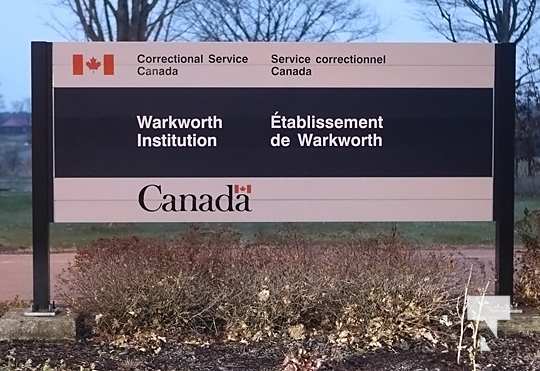 A former employee at Warkworth Institution pleaded guilty of breach of trust in connection with smuggling in tobacco.

Macklin was charged with breach of trust, possession of contraband beyond visitor control point in a penitentiary and possession of property exceeding $5,000.

Macklin plead guilty to the charge of breach of trust in connection with his job by being in possession of contraband and proceeds of crime.

Crown Attorney Wood read the agreed statement of fact over the audio conference as stated below:

On the 11th of July 2019 the accused, Gary Macklin, was employed as an instructor at the mechanic shop of Warkworth Institution in the Township of Brighton.

During the evening of the 10th of July 2019 the accused received $5000 dollar cash and ten 50 gram bales of Players tobacco at his residence. The delivery of the tobacco was arranged through an inmate incarcerated at Warkworth Institution.

Macklin would receive $5000 cash and then would be responsible for smuggling into Warkworth institution ten 50 gram bales of tobacco. The introduction of the contraband tobacco was to be completed by Macklin within a seven day pre-agreed time frame.

The front entrance of Warkworth have signs indicating that tobacco is prohibited within the institution.

There is a staff member assigned at the front entry to x-ray all items coming into the institution to prevent contraband from entering.

Macklin attended his work at Warkworth Institution and placed his lunch and personal items in the scanner.

By placing the contraband tobacco in his boots, Macklin was able to bypass the security measures and introduced the contraband items into the inmate population.

After attending his area of work Macklin was met by an inmate in the institution.

Macklin removed the tobacco and handed the contraband items to the inmate.

This inmate was intercepted by Correctional Officers and the tobacco was seized.

Macklin was approached by the Deputy Warden of Warkworth Institution and admitted he had brought the contraband tobacco into the institution.

The accused disclosed that he was being paid $500 cash for every 50 gram bale of tobacco brought into the Insitiution.

At 2:21 pm the accused was arrested by members of the Joint Forces Penitentiary Squad for the Breach of trust and possession of Contraband.

Wood stated that Macklin co-operated in the police investigation and admitted to have been smuggling tobacco into Warkworth since the fall of 2018. Macklin admitted to having received $55,000 cash for his efforts to smuggle in the tobacco.

Macklin told authorities the reason he was smuggling in the tobacco is because he was threatened by the inmate.

The nature of the threats was never disclosed to the police.

Macklin offered and delivered the fifty-five thousand dollars of proceeds of the crime to the police.

Macklin was “released” from his position with the Correctional Service of Canada.

Wood said Macklin has co-operated with authorities in their investigation and the inmate was subsequently charged with an offence under the Correctional and Conditional release act by Northumberland OPP.

Macklin has no previous record, but the Crown is seeking a jail sentence.

The matter was put over for a pre-sentence report and the case was put over to August 26 at 9:30 a.m. for sentencing on the breach of trust. The other two charged will be spoken to at that time.

On Monday, September 28, 2020, at 6:15 pm, uniform members of the Cobourg Police Service responded to a call

The investigation is continuing following a fire in Hamilton Township earlier this month that yielded thousands of marijuana plants.On