Councillors Walk A Mile In Her Shoes 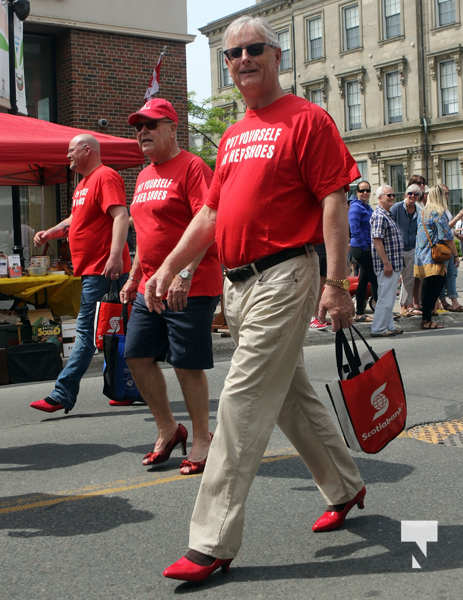 Cecilia Nasmith/Today’s Northumberland
Cobourg councillors were among the turn-out that made the Cornerstone Family Violence Prevention Centre’s 11th annual Walk A Mile In Her Shoes fundraiser such a success.
“I hate to admit it but, like the mayor, I am actually getting good at walking in these shoes,” Deputy Mayor John Henderson said this week of the red high heels that are required footwear for the male participants.
“I’m looking forward already to next year’s event.”
Established by Cornerstone 11 years ago, the fundraiser invites supporters to put on red high heels to walk a mile down King Street in a woman’s shoes – literally. In recent years, the event has become part of Cobourg’s annual Downtown Business Improvement Area Buskerfest, which guarantees walkers an up-close-and-personal audience as they go through their paces.
Mayor Gil Brocanier has a record of showing up at every Walk A Mile event since the very beginning.
Cornerstone manager of communications Carly Cunningham has put out a press release to announce another successful Walk A Mile on June 9. While an official total will be announced later in the month, as donations continue to roll in, the event did draw 125 men, women, children and families as participants. And the $37,000-plus that was raised did exceed their $35,000 goal