Cobourg Resident Finds A Way To Be An Angel To Many 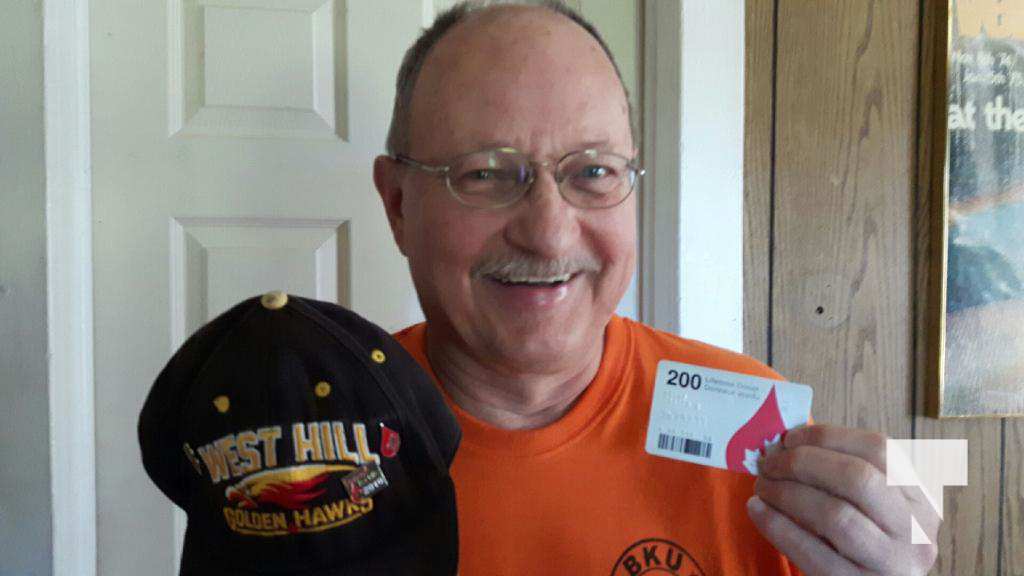 Cecilia Nasmith/Today’s Northumberland
As a senior on a fixed income, Cobourg resident Carter Brown cannot support his community with donations of cash, but he is most generous in sharing another kind of treasure – blood.
As a long-time blood donor who will give his 250th donation June 20, Brown admits he has provided a gift that makes him an angel to many. And on the occasion of National Blood Donor Week (the week of June 19), he is sharing his story in the hopes of inspiring new angels to follow his lead,
It is widely known that one blood donation, when broken into component parts like platelets, can benefit three to four patients. At 250 donations, Brown figures he has directly helped perhaps 1,000 patients. And that doesn’t take into account the families who are made richer through the lives of loved ones helped, healed or saved.
He was 18 when he gave his first donation, a young man working in an Ottawa department store who happened to see a blood-donor clinic set up in the mall.
No way, he thought.

But he passed by a few times and thought back to his brother, who had died a few days after being hit by a car while crossing the QEW and had required blood. Just as the clinic was closing down, he arrived in time to make his first blood donation.
As the years went by, it occurred to him his family had benefited from other angels who gave their blood. His mother Eva Brown had her own health issues. His father had died in Toronto’s Sunnybrook Hospital after being wounded by shrapnel in the Second World War. His wife fought a valiant but losing battle with cancer.

As a competitive individual, Brown also acquired that kind of attitude as the numbers piled up, His latest landmark was an amazing 200th donation in 2010.
Born into the Peters family in Peterborough (though he acquired his stepfather’s surname), Brown has worked and lived in many communities, donating blood in many clinics and seeing many ways of running them. Timbits are offered to donors at Cobourg’s Columbus Community Centre to help them relax and refresh, for example, but he has seen a Guelph clinic that offers pizza (and American clinics that offer beer).

One thing that has changed is how they celebrate long-time donors. He was a regular donor at Toronto’s Manulife Centre clinic, where they hung photos of 125-time donors. He was just closing in on that mark himself, when they took all the photos down – they were concerned about the privacy of their donors, he was told.
Brown did receive a special pin for his 200th donation that he wears proudly on his West Hill Golden Hawks hat (the team his grandson James McBride plays for) and a card signifying the achievement he can carry in his wallet. That Golden Haws cap also contains his Donor For Life pin for all who made a commitment to donate blood six times a year.

He will no doubt have a place in the spotlight at the next big Canadian Blood Services event in Peterborough.
Other changes in blood-donor clinics have been quite positive. For one thing, you can make an appointment that helps you plan your visit better than just dropping in. The pre-donation questionnaire is still around and, with fewer than 30 questions, only takes a few minutes. But you can go on-line in advance and fill it out, saving even more time.
Most employers would allow time off for a blood donation, he said, but one might realistically accomplish this over a long lunch hour (or during the evening hours that most clinics offer).
And guidelines now allow you to donate after age 65, as long as you are in good health (good news for Brown, who will soon celebrate his 76th birthday). Men can now donate every 56 days (women can give every 84 days).

Blood donors must be 17 to make a first donation and, now that James is 17, Brown has asked him to consider it.
“He says, ‘No way, Grandpa!’ But he’s so proud of me – it gives him something teo share about somebody in his family.”
And as he has made presentations to three of his grandson’s classes during elementary school, perhaps some of those children are now taking that important first step to becoming regular donors.
Canadian Blood Services depends on having enough donors, and especially likes to see long-timers like Brown. And he talks it up every chance he gets, even working it into unrelated conversations. During a recent call of complaint to a service provider, for example, he learned that the 19-year-old on the other end of the line had an appointment to make his first donation within a few days.
When approaching his 180th donation, he was at a meeting of a service club he attended in Toronto. It was a crowd of about 180, and he challenged each member present to give blood once and match his total.

In the end, only one man took up his challenge – but that man is now on his 140th donation.
Brown has been in touch with Ondra Stancu of Canadian Blood Services and picked up some interesting statistics, such as the fact that only 4% of Canadians eligible to give blood do so.
Over the course of a year, there will be 1,300 blood donors in Cobourg, 600 in Port Hope and 8,300 in Peterborough
The blood they give goes to a Brampton laboratory for testing, typing and processing, but about half of that blood will return to the home community where it was given.
“That’s quite an interesting figure,” he stated.
By the way, Stancu told him that, in her 13 years with Canadian Blood Services, she nevr met a 250th donor until last year.
“There are a few of us,” Brown allowed.

Brown has occasionally entertained the notion that frequent blood donation might be one reason for his youthful looks and good health. As a diabetic, he is careful about what he eats. He is a non-drinker and non-smoker and has no bad habits beyond being obsessive about puzzles and genealogy. But he finds he feels really healthy after a donation, and has to wonder if the process of his body generating fresh blood to replace the litre he donated might have something to do with it.
“As I have gotten older, one of the things I have thought about is that everybody needs an angel sometime in their lives,” he said.
“To some degree, I am a kind of angel. This is my way of giving back.”
Brown is not looking to blow his own horn by publicizing his 250th donation, but to inspire others to become donors – long-time, sustained donors, if at all possible.
And though TV cameras will be on hand to memorialize his own landmark, Brown said it’s a day for every donor to be proud of doing something that will be a blessing to a family in the community (perhaps in his or her own home town).