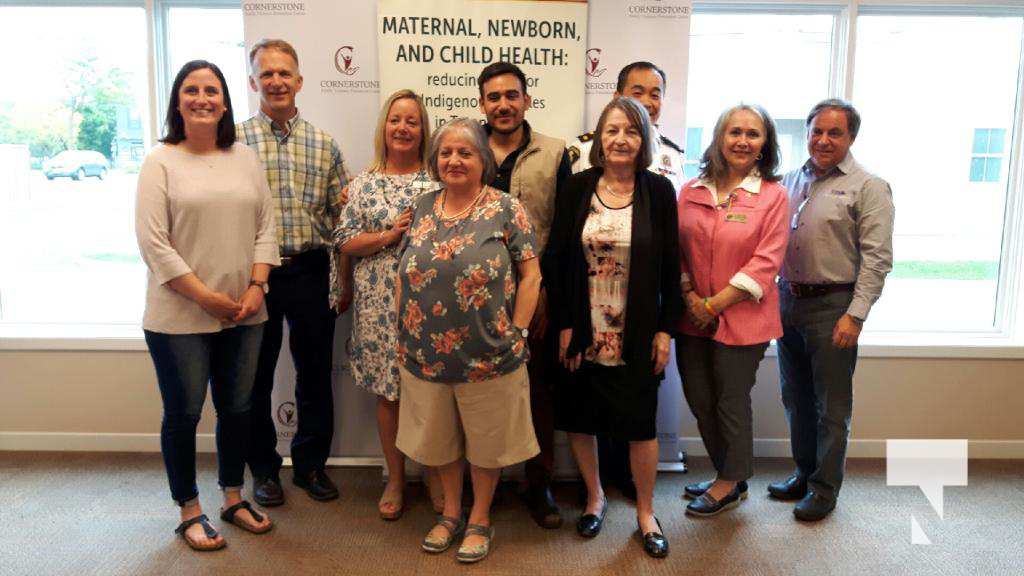 Cecilia Nasmith/Today’s Northumberland
An exciting and unique partnership among three Cobourg community organizations may make a difference to the lives and health of the women and children in an Indigenous Maya community in Guatemala.
Horizons of Friendship communications co-ordinator Raul Scorza announced Monday that the Cobourg-based non-government organization will team up with Cornerstone Family Violence Prevention Centre and the Cobourg Police Service for a knowledge exchange with the province of Totonicapan, Guatemala, as part of its multi-million-dollar project of working with the Association for Health Promotion, Research and Education in Totonicapan to enhance maternal, newborn and child health among the Indigenous Maya population of that community.
The exchange will begin with a 10-day trip to Guatemala in September that will see three Horizons staffers joined by acting Staff Sgt. Brent Allision of the Cobourg police and, from Cornerstone, executive director Nancy Johnston and child and youth community counsellor Lucy Caldwell.
“Indigenous women and children live in a completely different situation than non-Indigenous women and children,” Scorza said.
The women are twice as likely to die in pregnancy or childbirth than their non-Indigenous counterparts, for example, and the mortality rate for Indigenous children under the age of one is 67% higher than the non-Indigenous population.
“The great majority of these deaths are preventable,” he stated. This is the focus of their work with their Guatemalan partner in such initiatives as obtaining nutritional supplements for women during and after pregnancy, ensuring clinics have the appropriate medical equipment and supplies, and mounting public-health campaigns in the Indigenous language of the majority of the population.
The focus of the knowledge exchange will be to address one negative factor that accounts for too many instances of endangered health among women and children – gender violence, which inflicts physical, emotional, sexual and economic harm. The World Health Organization goes further to say that this treatment results in disorders and unwanted preganancies in which complications are more likely (as are lower-weight babies).
Scorza read a quote from a Doctors Without Borders physician that recounted the remarks of so many women that they are treated as objects, treated like garbage. He added that Guatemala ranks among the top three countries in the world with the highest rate of infanticide, and that 62 women a month (in 2017) were killed solely because of their gender (a total of 7,000 over the past nine years).
Part of their work now involves workshops aimed at male community leaders in which they are invited to explore new concepts of masculinity and encourage new protocols when cases of gender violence are identified.
“Cornerstone and the Cobourg police will observe and be part of these initiatives, and will also work very closely with traditional Indigenous figures, and will be asked to lead a workshop where they can share their own experiences here in Canada with addressing, responding and preventing violence against women,” Scorza said.
“It’s a two-way learning experience. Our participants will be able to observe how Guatemala deals with all its realities, all its challenges with violence against women and, in particular, maternal and child health. It’s a two-way learning avenue that focuses on bringing local expertise, local knowledge to the global level.”
Cobourg Police Chief Kai Liu said his force considers the invitation a privilege, and shared his own memories of being a participant on such an exchange when he was with the Ottawa Police Force and CIDA and the United Nations included him on a similar initiative that took him to Trinidad and Tobago, the Maldives and Sri Lanka.
“We are not going in strictly to teach. Participants will learn as much if not more to bring back to our community,” the chief predicted.
Not only are Cobourg’s demographics changing, he continued – Cobourg attracts great numbers of summer visitors from the GTA annually.
“It’s important our officers recognize and foster cultural competencies to support the visitors that are coming, to give that open-arms of welcome to visitors or new residents who are moving in.”
“I see this as an opportunity to broaden the conversation around family violence and gender-based violence,” Johnston stated.
“It’s a great opportunity to see what happens in Guatemala, and our work and our follow-up is to share what we have learned there.”
Johnston pointed out that Cornerstone’s annual general meeting is coming up, at which time a more in-depth presentation on this project will be shared. It starts at 6:30 p.m. June 19 at the Cobourg Public Library.