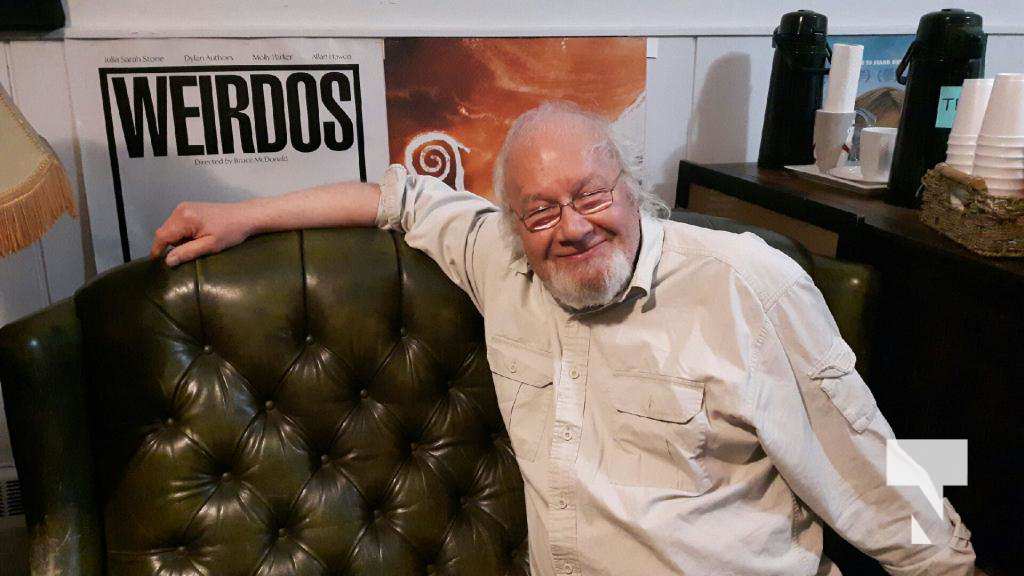 Cecilia Nasmith/Today’s Northumberland
No one can argue with a leaky bucket, and local arts devotee Ken Prue believes it poses a solid threat to the local arts community.
That cryptic phrasing makes sense when one sits down with Prue as he shares his thoughts on what we can learn from the recent disbanding of Port Hope’s Friends of Music.
Founded in 1975, this pioneering not-for-profit cultural organization was the first in a list he compiled of six significant ones formed in the ensuing 15 years. The others are Northumberland Players (founded in 1977), Victoria Hall Volunteers (also from 1977), Northumberland Orchestra and Choir (1978), the Marie Dressler Foundation (founded in 1990, with its Vintage Film Festival established four years later) and Victorian Operetta Society (1990). All have the tax-free charitable status that is so rarely granted today – a golden asset which moves Prue to refer to the 1975-to-1990 era as a Golden Age of Culture within the local arts community.

Prue researched each one of the six, reviewing its mission statement, vision statement, and the state of its board, governance and volunteers. Each review amounts to an encapsulated diagnostic exam, complete with his own prognosis.
For Friends of Music, the game has played out. They have made the announcement that they are ceasing operations.
It started out with 400 active subscribers, putting on quality classical concerts by renowned artists – at first in a local church, later at the Capitol Theatre. Over the years, as ticket sales fell and the Capitol got busier, they went back to concerts in Cobourg and Port Hope churches. Their last two concerts brought in only about 85 ticket holders each in spite of the world-class programming offered.
The founders of these groups from the Golden Age were from those years when Cobourg’s population grew 42% as a result of retirees, who were typically people who had survived the Second World War.
“Retiring educators and civil servants with the skills to set up these organizations and make them thrive,” he summed up. They were in the 55-to-60 age range, and typically so were their audiences.
“You always end up affiliating with your age peers and marketing to your age peers, it seems,” Prue commented.
“As they aged, so did their audiences – classical music, live theatre on the boards, orchestral music, vintage movies, with audiences aged 55 to 60 at the inception.”

Both groups are now largely made up of those aged 75 to 80 for the most part and, like a leaky bucket, the organizations are losing their key figures as they close in on the age of 90, often growing frail and sick (or dying). Prue calls this the Leaky Bucket Syndrome.
In so many cases, he said, the organization pretty well lived in the head of its founder and perhaps two or three associates who did the key work.
“Everyone else is like troops marching to battle, wondering where they are going and if anyone brought overcoats.”
Prue’s diagnosis of the remaining five organizations on the Golden Age list (apart from Friends of Music) is that three are wobbly and two are still very dynamic – but not without their challenges.

He pointed out one he considers the all-star of the list, applauding its clarity and explicitness of mission statement and vision statement. But it too is suffering from board fatigue, with second- and third-generation members. And audiences are dwindling, creating discouragement and frustration.
Like most organizations, it needs more volunteers. But there’s a dwindling pool of them to go around among agencies of all kinds, cultural and otherwise.
Being newer is no guarantee of success, he pointed out. Prue also has a list of five significant organizations founded in the 21st century.
The Shelter Valley Folk Festival folded after its 2017 show, after a dozen years, and the All-Canadian Jazz Festival in Port Hope (established in 2002) failed to put on a 2017 show.
Other organizations on the list include the one he founded, the Northumberland Film Society (founded in 2003), as well as the Northumberland Film Festival (established a year later) and the Northumberland Learning Connection (founded in 2005).
These founders were mostly retiring members of the Baby Boomers, the demographic Prue said moved through the Canadian population like a bubble.
“The first of them retired in 1999,” Prue said.
“When you are 60, you are probably as smart as you are ever going to be, and you aren’t tired yet. You are freed of the grind, and you throw yourself into this stuff and do great things. But 10 years later, it’s a different story.”

The Shelter Valley festival suffered when its founder departed. Aengus Finnan was a shining star on the folk-music scene and, though he left the festival in good hands, his successors did not have quite the fire and vision that he did.
The relatively young Finnan is an exception, Prue noted. Otherwise, the founders of the second generation of cultural organizations are now within a year or two of their 75th birthday.
Ten years is also taking its Leaky Bucket Syndrome toll on the behind-the-scenes organization as well as audiences, he added. In some cases, attempts to present an edgier product to attract a younger audience merely result in further attrition of the audience.
“Most of them don’t have paid administration and clearly need a community support network that enables organizations like this to succeed, because they can’t succeed on the intelligence and good will of a lot of accomplished – but by now elderly – people,” Prue said.
“If it’s a lot of work to keep things happening, discouragement will set in and board members will get discouraged, and it will be hard to recruit the volunteers and get the audience.
“My contention is that the boards of most of these organizations are frustrated. They are pissed off, but they are mostly too polite to say so.
“They are quitting, leaving gaps and lack of continuity, and their discouragement is being picked up by the volunteers required to keep these events going.”

Succession planning should be seen as a vital part of governance in these organizations, Prue said, and he is cheered to see that the incoming chair of one group on the list is already looking ahead to ascertain who might be a successor.
All that is only part of the problem Prue has discovered in his informal study. Cobourg and Port Hope venues are also inadequate.
Port Hope has little besides the Capitol Theatre.
“It has as powerful a board as you are likely to find anywhere, and that board is super-stocked with talent,” Prue said.
However, success has a price. It has evolved into a highly popular venue for big productions with professional performers who require its facilities for rehearsals and sustained performance runs. As a result, some performers are finding they cannot book there at all for lack of available dates.
This is similar to what’s happening at the stately Victoria Hall Concert Hall, which has become a popular wedding venue. Between that trade and scheduled performances, a date there can be hard to get.

Cobourg does have a couple of nice intimate venues downtown in the Northumberland Players’ Firehall Theatre (which was originally an actual firehall) and The Loft (established by Prue several years ago as a place for both film and live performance).
Though the Cobourg Community Centre has hosted Blue Rodeo and Tragically Hip concerts, it had to be specially fitted out at great expense for these shows since its roof trusses cannot support the sound systems big acts require (an expense a public-minded citizen absorbed).
The centre has wonderful seniors’ programming theatre and it’s an amazing hockey venue – “but nothing there you could rightly call culture.”
Prue still holds out hope for the Park Theatre. Even though its physical condition is such that the town rejected any idea of getting involved in its restoration, prominent supporters still would like to see it thrive again as part of the cultural scene. Prue would love to see this strong dedication harnessed into the sustained kind of active support that the Capitol had over the years it took to get the heritage theatre from an unused (and useless) building to the success it is today.

Prue hopes for the best with the upcoming cultural planning exercise the town is undertaking.
And he is pleased to see that a bird of a different feather has recently roosted in the local cultural community, since classical composer Michael Pepa moved to Cobourg. Pepa helped organize the popular Les Amis Concert Series in Toronto 35 years ago, but he has started to present these concerts to local audiences – coinciding somewhat with the cessation of Friends of Music.