Responsibility for Abandoned Ice Hut Up For Grabs 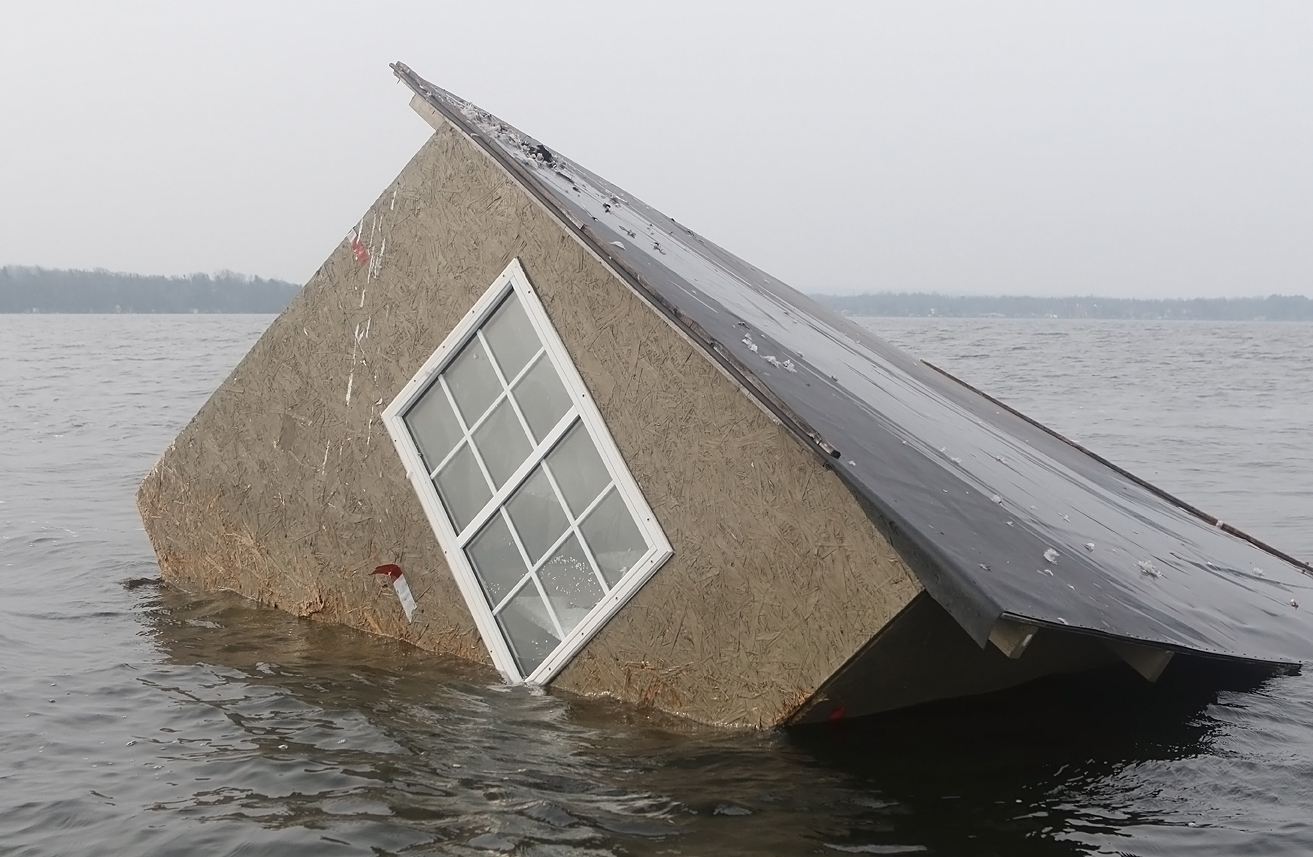 The responsibility for removing a partially submerged ice hut on Rice Lake seems to be anyone’s guess.
Ice huts were supposed to be off the lake as of March 1, but apparently the one on the north side of Rice Lake by Sugar Island seems to have been forgotten.
Ironically the Provincial and Federal Government seem to be taking the same position as the owner of the hut.  Abandoning it – at least for now.
Alex Begg spotted the hut on the north side of Rice Lake off Sugar Island early last week.  Looking inside was a shocking discovery.  A propane tank and gasoline canister were floating inside along with other items. It’s a safe bet the large hut has been in the water since ice fishing ended.
Taking a boat out to the half submerged hut it would appear that it is partially resting on the bottom. Ministry of Natural Resources and Forestry spokesperson Jolanta Kowalski says conservation officers enforce fishing laws during the ice fishing season.
“Although we do have kind of a level of responsibility on Rice Lake regarding ice fishing activities, Rice Lake is on the Federally regulated Trent-Severn Waterway.”
“So our Provincial Legislation such as our Public Lands Act which would be in effect for something like an abandoned ice hut doesn’t apply in this case because it’s on a Federal waterway.”
Kowalski said the MNRF have advised their “federal partners” and “we’re going to help them as required, but any questions regarding this specific ice hut on the Trent-Severn Waterway should be referred to Parks Canada, Trent-Severn Waterway Division.” Kowalski said the Ministry of Environment has a role to play for deposits that go into a lake.
“But in this case the best place to go is to start with the Waterway Division of Parks Canada.” “Public safety is of the utmost importance to Parks Canada. Given the current weather and ice conditions, the removal of the ice hut would not be advised at this time.”
“Parks Canada will continue to monitor the situation in collaboration with the OMNRF.”

After hearing that no government agency will look into the matter, Begg said, “why should we have to register our huts when the Ministry of Natural Resources doesn’t do there job on enforcing the law of getting the huts off the lake.”

“I think it’s very unprofessional for all parties to not care about ther situation that’s happening right now.  They would be up in arms if someone actually got hut by this object when the boats start to hit the lake.”